In Hamburg, the Russian journalists will visit various newsrooms ranging from the public-service broadcaster NDR and big private publishing houses to dynamic media start-ups in the vibrant Schanzenviertel.

The program will kick off on July 14, 2016 in St. Petersburg, followed by an intensive e-learning phase of six weeks. From August 28 to September 3, 2016, the participants will visit Hamburg, St. Petersburg’s sister city since 1957. The program will be rounded off by final discussions online.

Like all courses at the Interlink Academy, this program is run by specialized lecturers, trainers and moderators who have considerable experience with international study groups. Great attention is paid to the journalistic expertise of lecturers as well as their experience as educators.

The program is sponsored by the German Foreign Ministry. Other partners include the Bumaga Media Group in St. Petersburg and the Senate of the Free and Hanseatic City of Hamburg.

Participants receive a scholarship grant to cover course fees and international travel costs. During the stay in Hamburg, the participants are housed in guesthouses or hotels at the expense of the Interlink Academy, and receive an adequate meals allowance.

The “Journalists From St. Petersburg Study German Media” program is meant for journalists from across all media genres in St. Petersburg and environs. Applicants should show a level of interest in Germany and German media. The working language of this program will be English, but some knowledge of German is an advantage. 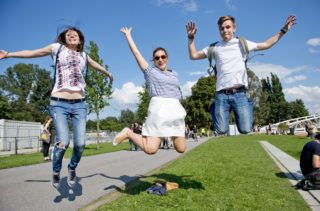 Applicants are expected to have demonstrated their journalistic talent as a member of an editorial team or as a freelance. An understanding of the role of independent media in democratic societies is a given.

The Interlink Academy expects salaried editorial staff to be released for the duration of the attendance phases while continuing to be paid by their employer, and to receive appropriate support from them during the e-learning phase. Freelance journalists should ensure that during their stay in Germany, they are able to pay their ongoing costs in their home country. The attendance phase in Germany may require participants to compromise on their traditional diet and daily routine. Applicants must be in possession of valid international travel documents.